The Dandy's page numbers by Jamie 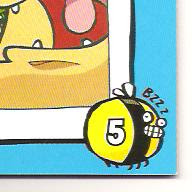 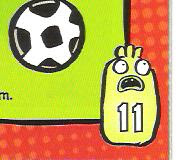 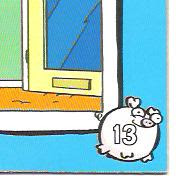 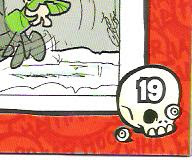 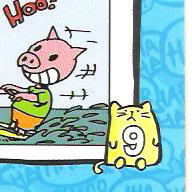 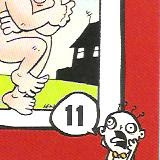 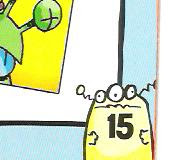 What is so good about about this small detail is
A) Its different every week
B) The numbers are clear
C) they are great fun and creative..

The Beano has started doing page number pictures as well...But it looks like theirs will stay the same each week (could be wrong!) a Minnie Beret for Minnies page a splattered tomato page number for Dennis...

But well done Jamie for bringing in this fun idea..and lets hope it continues to be different even after a year and not on a loop..:)

Jamie has done other great details in The Dandy (e.g the Blue Blob characters that appear on lots of pages...the Dandy issue number on the contents page has started to be different) and draws some very funny pages like Desperate Dan, Thingummy Blob and The Arena of Awesome which I'll cover another blog post in the future..

Email ThisBlogThis!Share to TwitterShare to FacebookShare to Pinterest
Labels: Jamie Smart, The Dandy

I'll put it up on my animal art site later on for sale of cards and prints..
www.petergrayanimals.co.uk

Spy asked me for some of my tips in art he said I should call it PG Tips!...well here are some of my thought process and ideas..

The Kangaroo above is drawn using two photos from different books..the original photo of the kangaroo had a blurred background...I found a picture of Ayres Rock which fitted perfectly with the drawing..the grasses I added also helped to highlight the babys head...also like the distance I've created..the rock also has a similiar shape to the kangaroos curved body..the grasses also are like the fur on the kangaroos body...its useful in a drawing to have similar shapes throughout..like the shadow on the rock and on the kangaroos back..

Another thing I do is I try not to draw everything and leave spaces so the eye can move around...I don't draw every bit of fur for example..
I often draw right up to the edge of the picture partly as I like drawing the animals face best and not so keen on drawing feet:)..But also it does make it more dramatic and has more impact then if this kangaroo was smaller with more landscape..

My biggest difficulty is when to colour and when to keep it black and white has my customers..friends and family all like different ones..so I do both...this kangaroo is more of a detailed drawing I decided not to colour it...though would love to paint some nice reds on Ayres rock..so I will in the future draw another kangaroo art and in colour another time..
I also try to make each picture different...partly because I want to experiment with new ideas..colours..a new animal..and to keep pushing myself..
John K's blog has really helped me with his animation advice...he is often going on about making the negative space interesting and clean..which I try and do..and other useful tips..

My art is expressive..childlike..and has character..
and you can see the cartoonist of me in my art..as well as my love of the Mr Men when I use bold outlines and bright flat colours..

I stick to drawing animals has drawing people in my mind is a lot harder..
I draw a picture a week...5 a Month..normally one of them is not working so I just move on to the next..when I try to correct one thats not working it can make it even worse...and be overworked..
I draw on my lap in my chair or in the library..when sunny on a bench in the park..
I use watercolour pencils and a bit of acrylic paint on top...so mixed mediums..
I always use photos But try to make it different to what I'm seeing...so it becomes my image..

Its important to show your art to lots of people it always useful to get feedback..
I of ccourse enjoy drawing..though it can feel intense when working on a piece I do a lot of staring at it and keep fiddling with it to try and get it to what I want.
..it can be hard to stop..

I've started doing a speadsheet for the first time and it is tough seeing how much you spend..rather than make...But I'm slowly getting there and doing well in selling prints which have improved my profits greatly than just selling cards..

I am working hard to make this work and take off..I will get there one day..

Has Spy has said in his comments I've learnt a lot from studying comic art like Jack Prout who is an amazing artist..
also Tony Hart 'Hart Beat'...Rolf Harris Cartoon Club tv programs have been very inspiring and some good episodes are up on youtube.....I even say watching an episode of Hart Beat in September 2009 is what inspired me to give it ago...Tony had drawn this amazing elephant...so this is what got me started..
at April 24, 2011 3 comments:

Spring is here!! A great The Passing Show cover 1937

I bought this today for £7...the cover just was enough in itself for me to buy...just full of joy and fun..a nice Spring fairy type women pushing the man to enjoy his garden once again...with a lovely bright yellow background...

Inside there are some nice old drawn adverts for cameras..vacuum cleaners..erm cigarettes...lots of men smoking pipes..:)..also there is adverts for the Coronation year...not enough cartoons inside for my liking..and lots of stories to read..But the cover and the adverts are the best thing about it..

the artist is Gilbert Wilkinson..
http://www.cartoons.ac.uk/artists/gilbertwilkinson/biography


See more Passing Show covers here...though the one above isn't on there website..
http://www.advertisingarchives.co.uk/index.php?service=search&action=do_quick_search&language=en&q=the+passing+show
at April 22, 2011 No comments:

The Dandy 24th December 1988
Here George looks like a Viking Yosemite Sam type..not sure of the artists name..this w a short lived strip..

The Dandy 13th March 1999 Heres George and the dragon again in one of the last pieces John Geering drew..

Its fun to know Andy came up with this idea of George v's the Dragon and didn't know that it had has a life in The Dandy before..
at April 20, 2011 4 comments:

not so good tone colours in this one..

Email ThisBlogThis!Share to TwitterShare to FacebookShare to Pinterest
Labels: Ken Harrison, The Dandy

Ron Spencer's The Dandy 'Tumba and Rumba the mimicking elephant'

The Dandy 16th September 1989..I don't have many from this era so this is the only example I have..as you can see Ron has great fun drawing the elephants...love the squashed up nose after running into a fire engine! also some great human characters in this..really captures the early era..
at April 18, 2011 No comments:

The Dandy 15th Jan 1994..I think Gums has appeared other times in Bananaman despite it from another comic company..DC Thomson..so interesting to see..its fun how Gums name is mentioned in the strip indirectly..:)

The Christmas Dandy had two covers..one by Steve Bright was on the front this is the back cover..pretty gross decorations!!

I wonder if Tom Paterson will draw for the Dandy again look what they are missing!
Tom does a great job on Fred's Bed in The Beano at the moment.

Nigel Parkinson said in the comments on a previous post that The Dandy also did cut out booklets and here is one from The Christmas Dandy.

In the queue is The Champ But also E.C Ryder on the phone
E.C Ryder was from music paper Disc in the late 70's.
Both drawn by Jack Edward Oliver.:) Jack was great for the hidden details..and of course theres Popeye!..Doctor Who..The Joker references as well...Wow!

I'm so pleased I became Jack's friend...and I still miss him..