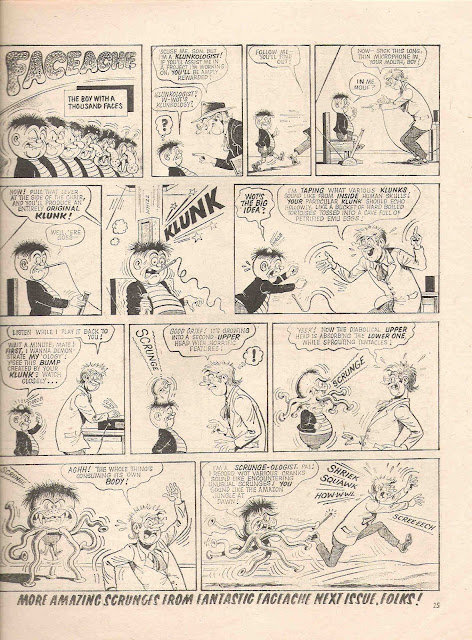 Ken Reid is a great writer for Faceache.
This story above is quite strong stuff the way it seeps slowly over Faceache the bump on his head!!!
What a clever idea as well! Faceache really fitted in well when Buster and Monster Fun joined. Bringing other horror fun characters. You can see that Ken still drew two halves separately and large to get in all the fine detail. 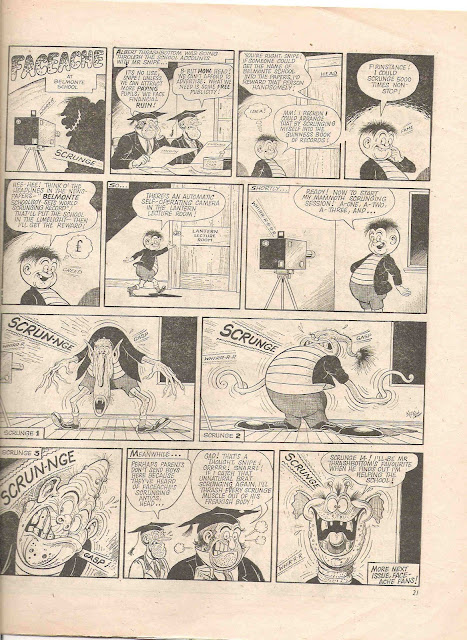 Buster 24th Nov 1979
Faceache can scrunge 5 thousand times in different forms its revealed!!
Faceache leaves his father to start boarding school and meets some new regular characters the teacher and master (Thrashbottom and Snipe!) Caning in boarding schools still took place a long time after schools stopped!
Faceache going to boarding school was a great idea and Snipe in particular is a great character its the big nose and chin! 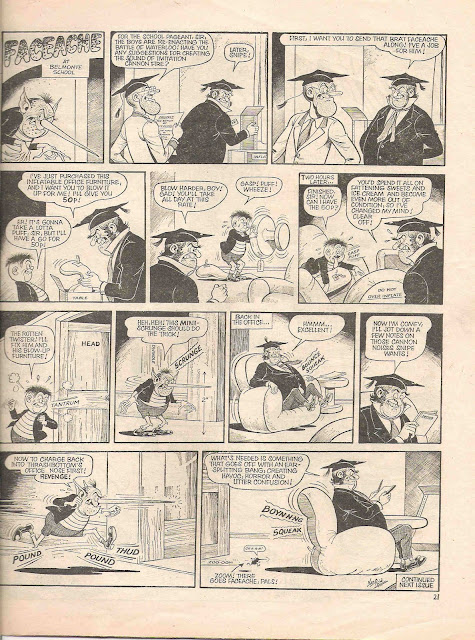 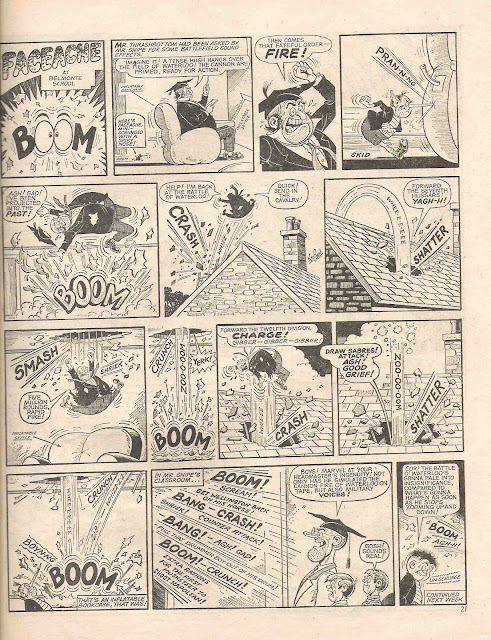 Buster 29th Sept 1979
At this time the stories were longer sometimes running into weeks..the two parter above is brilliant as it goes on and on and on...I don't have the next part... 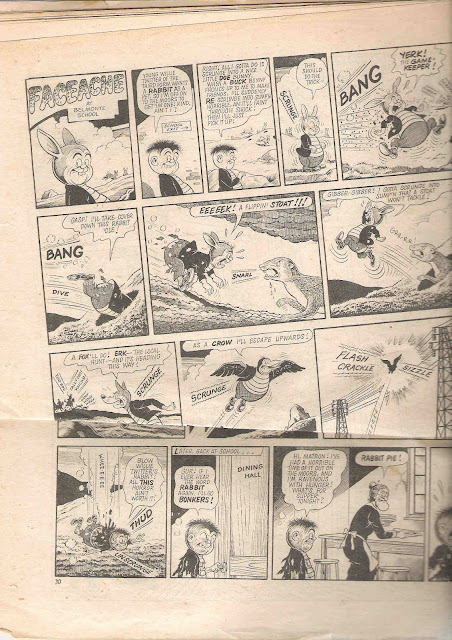 Ken Reid is like Segar's Popeye comic strip they both love drawing the strong emotions us humans have and can be very dark. We don't often see characters going really mad..very angry..doing bad things...good black humour in comics.

I will do a post on Faceache's Dad which I forgot to do in the first post.

More on Faceache to come....its been great rereading my collection on this brilliant strip. 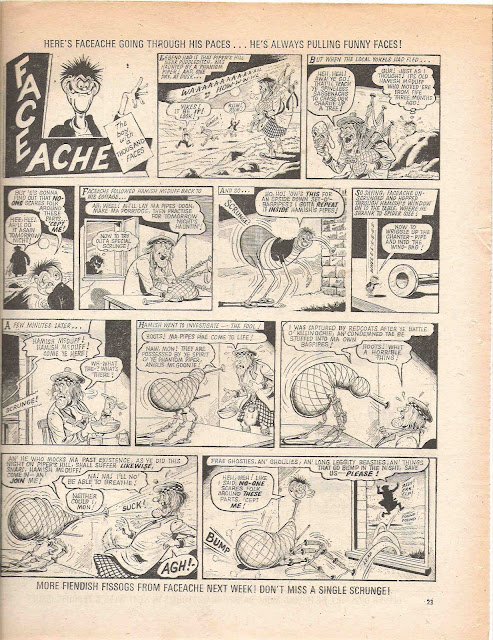 When Buster joined Cor!! the comic got slightly smaller which to me was a shame.
As you can see the top row is harder to see all the detail. The strip before had an extra half a row of space making all the difference. In Buster this also effected the adventure strips having less space to tell a story. 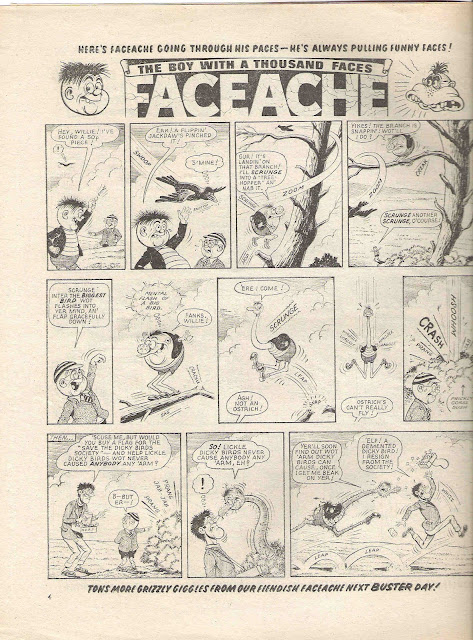 So Ken adapted and drew it has three rows. He also made the panels thinner to get the extra panels in. 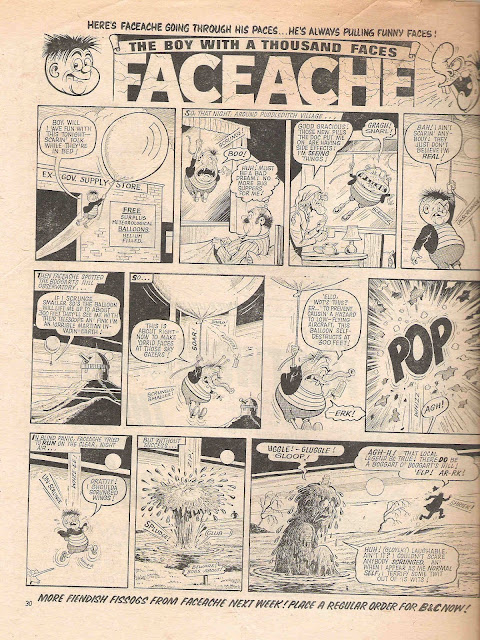 buster and Cor!! 7th June 1975
Also Faceache scrunges were more larger than life then before and the strip now says instead of a hundred faces But a thousand faces he can do!
at September 25, 2012 No comments: 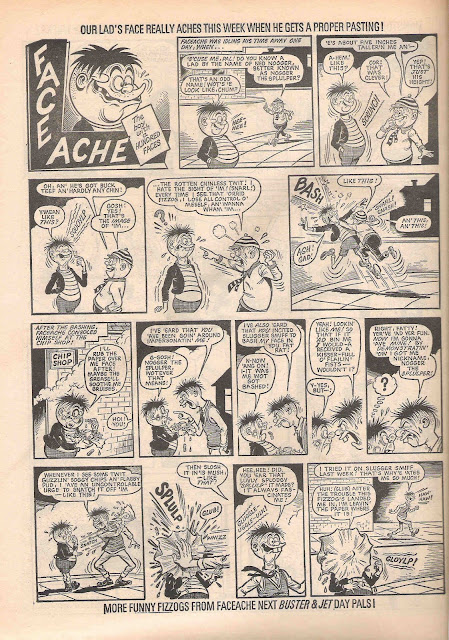 Buster and Jet 14th October 1972
What has been a revelation to me is that Ken Reid wrote Faceache all the way up to the early 80's only then did other writers take over...it happened when Jackpot joined Buster 1982. It shows how good Ken was at writing the strip and with his dark humour.

Looking at these two different strips and others I've noticed that Ken loved writing accents for his characters..or speech impediments. Ken did this in Jinx for The Beano with her buck teeth making her say th..all the time...like -Hi readerth! my nameth is Jinx's! Another great thing Ken wrote was funny sound effects like the strip above.

We don't see dialogue from characters being different much these days in comics...like the way Stan Lee wrote for his Marvel characters. It really is a great character device and should be used. 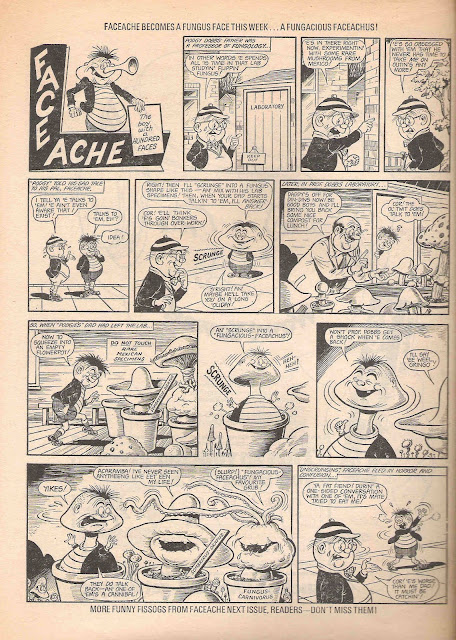 Buster and Jet 28th April 1973
This strip really creeped me out!

You can really see Faceache's  freaked out by it.. also the strangeness of it ..also the thought of the father is talking to them..which we don't see But can imagine!! Maybe its the mushtooms having no eyes But large mouths make it horrible to look at..

I'm going to have to get some more Buster from the 70's!


I don't cover many girl comics due to I never read them...But here a great blog that celebrates them..

This link show a creepy dummy that can talk!! and gets her into trouble!!

http://girlscomicsofyesterday.com/
Welcome to Girls Comics of Yesterday.  A fan site dedicated to British girl comics of the past, looking at three of the most long lasting publications of Bunty, Mandy and Judy.

A blog well worth looking at and covers girl annuals and gives a flavour of there stories...they can be very creative, strange and dark!

Also thrilling! and Surprising! See the Dennis the Menace on stage! :)

A picture tribute to the Dandy by Mike...its packed full of fun characters..

Here’s a tribute to the Dandy I read as a kid back in The Seventies. These characters were so well realised by the original artists that it was a pleasure draw them, but hard to do them justice.

This should be in The Dandy a great tribute...