Black Bob with the missing panel! 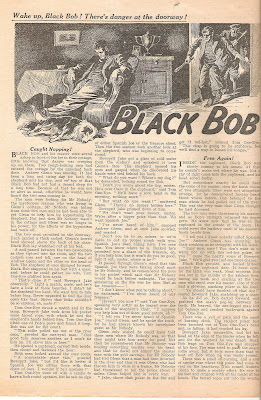 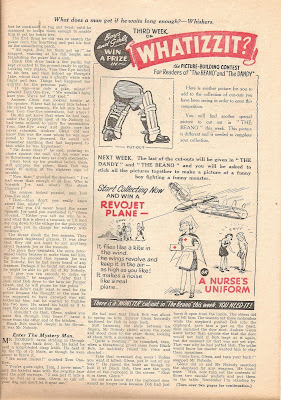 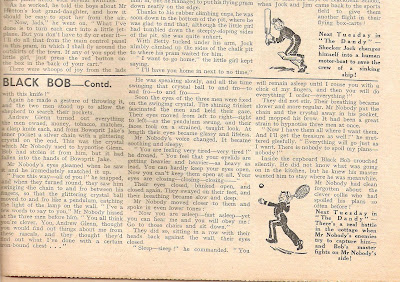 UPDATE due to comments on this post The Dandy 7th June 1952 with Jack's drawing on the first page.

The Dandy 19th May 1979. Look at panel 5!!!
Its a real treat finding this...lovely brick work and how small and helpless the master Glenn looks.

As you can see there is a new panel in the reprint of 1979. Showing the master down the well. This version also has different text..more simpler than the 1960's. Also it is shown over the top of the drawing..which is a shame has some of the drawing is obscured.

Black Bob was first shown in The Weekly News before it was printed in The Dandy. A panel was taken out as the newspaper was larger than the Dandy...the panel missing didn't spoil the story.

I hope one day D.C Thomson will produce a complete Black Bob book from the original Weekly New all complete.
Jack Prout art deserves it.
at March 26, 2009 6 comments:

I missed this one on the website I did on Ian Knox...and what a cracker it is..

Ian is great at drawing different kinds of monsters..
at March 24, 2009 No comments:

Incidentally this double-page spread from the 1969 Dandy Annual makes extensive use of one of Brennan's most recognizable trademarks whereby his characters' arms and legs are made to look three-dimensional with a black shadow running down the middle and lighter shading composed of parallel lines or cross-hatching along one side: if I'm ever unsure whether a strip is his work I always to look out for this distinctive technique.

He must of done loads of sketches out and about...he really got to know his subject matter...this is from 1970 7th Feb Dandy..

I love the different angles used in the strip..very clever...
the boy from Lilliput is from my Dandy comic August 19th 1972.

Isn't the talking ball just great..
love the fact the ball smashed up the cart and the dramatic final panel of a chase..
Lew another childhood object which is a bit menacing...
the pattern on the ball is great with lots of blacks..
also great use of angles...each picture different..the truck is shown in many different ways..a good feeling of speed..
I love it..
from October 1973 Dandy.. 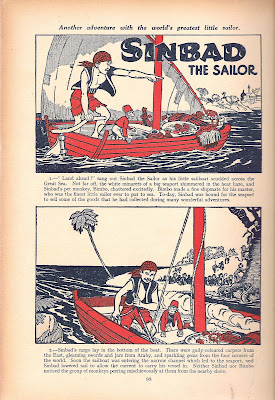 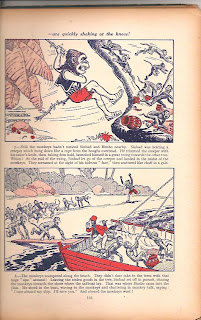 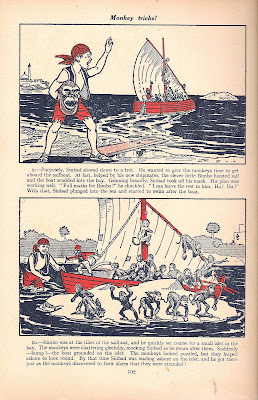 Slave monkeys obviously they have not seen planet of the apes!!!

Paddy also drew General Jumbo..Jack Flash..Bird Boy for The Beano..
for The Topper he drew the Whizzers of Ozz..
His adventure stories are up there with Dudley D Watkins..
at March 21, 2009 4 comments:

Hi, love the blog - a great bit of nostalgia! My great uncle (God rest his soul) worked for a printers which printed Fleetway comics; every couple of months he would give my grandad a stack of comics to give to me and my brother...my childhood was filled with British kids humour.

I wondered if you could help me in tracing the origins of a particular strip starring "The 12 1/2p Buytonic Boy". It appeared, I think, in one of the Krazy annuals (1982?) and featured crazy eye-catching artwork (very different from the character's regular artists, the fantastic Robert Nixon & Brian Walker). The strip was possibly drawn Ian Knox, I remember the style being alot how you have described his work..."exaggerated human and animal figures...bodies, legs and faces...all out of proportion in funny ways".

Any help you can give in locating this story will be greatly appricated - thanks for your time, Dean.

Found in the Krazy annual 1982 and its not a ghosting of Robert Nixon style at all..
Quite a zany style and like the many spys with dark glasses scattered about...even a spy bird..

A nice fun one...don't know if this one was different every week...I don't have many Power comics due to the expense and not from that era.

Mike Higgs drew different title panels with the characters who are in this weeks story.

Nice misty effect...it sets up the tone of the strip.

Leo Baxendale did some very busy mastheads...fab stuff...teachers smoke making the letters was funny..and the great fights in The Swots and the Blots.

Wacker had a different panel each week..

Ken Reid did some wonderful title panels..the Frankie one with the eyeball is creepy..and the Nervs crawling all over him and drilling his nose!! 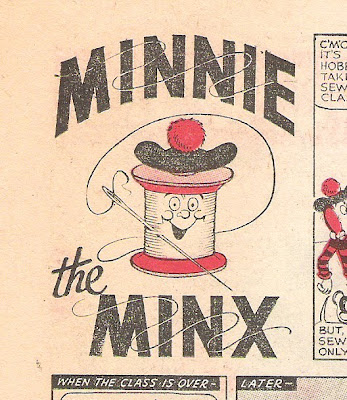 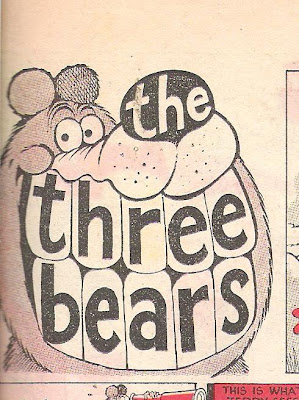 Leo Baxendale has of course done some very good logos..mastheads.. 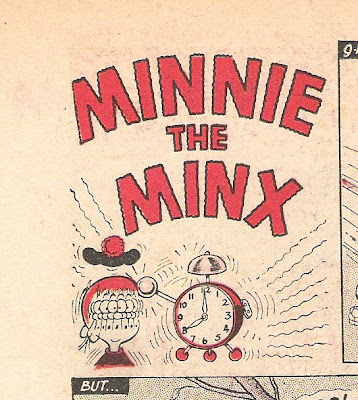 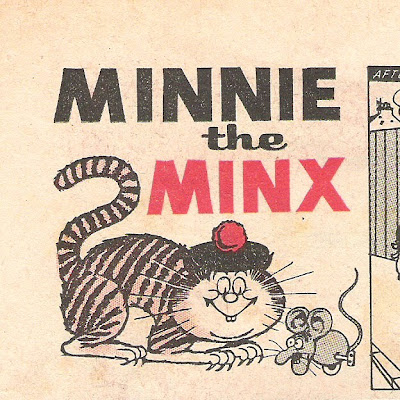 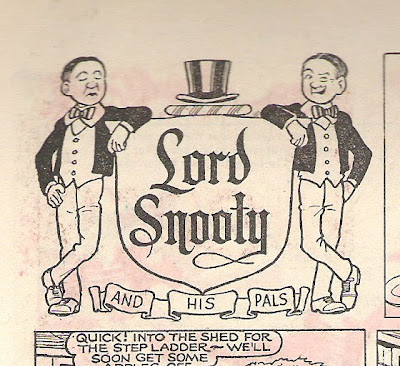 A nice logo by Dudley D. Watkins. Has some echos to the new Lord Snooty the Third logo by Nigel P. 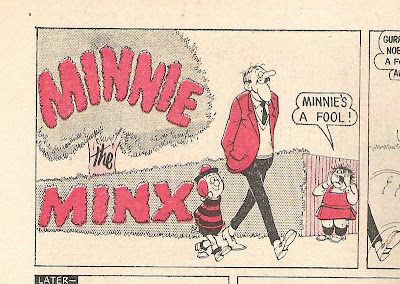 Jim Petrie did some great logos different every week as well..sometimes the logo blended into the background of the picture. 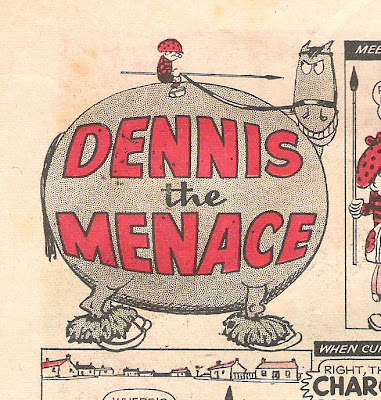 Davy Law did some nice logos changing every week...this is when the logo showed a bit of the story. 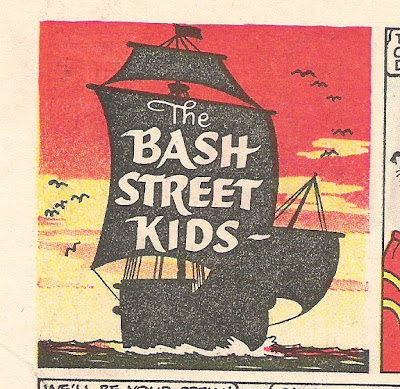 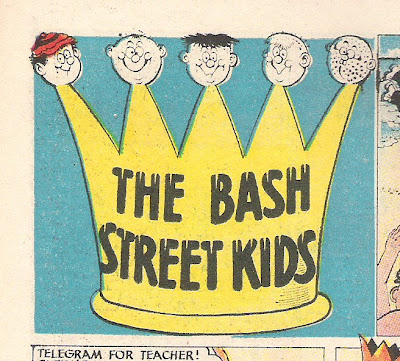 David Sutherland has done some wonderful Bash Street logos and still drawing a different one today. The king of logos!! 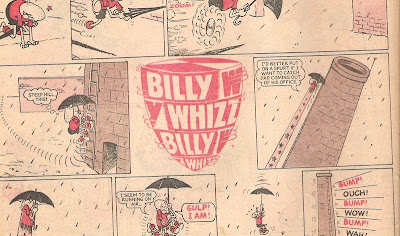 The Three Bears had some very memorable logos..maybe its because it made you hungry...drawn with relish by Bob McGrath.

What is fun about logo mastheads is it gives the artist a chance to be surreal...wacky..fun..
Maybe Todays Beano can bring back some mastheads fun...Ball Boy...Minnie the Minx..for example look a bit samey and could do with a change.
Lord Snooty the Third is good...Johnny Bean and of course Fred's Bed..
The Bash Street kids has the best logos in The Beano.
at March 12, 2009 5 comments: