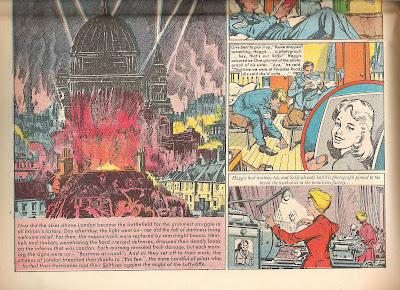 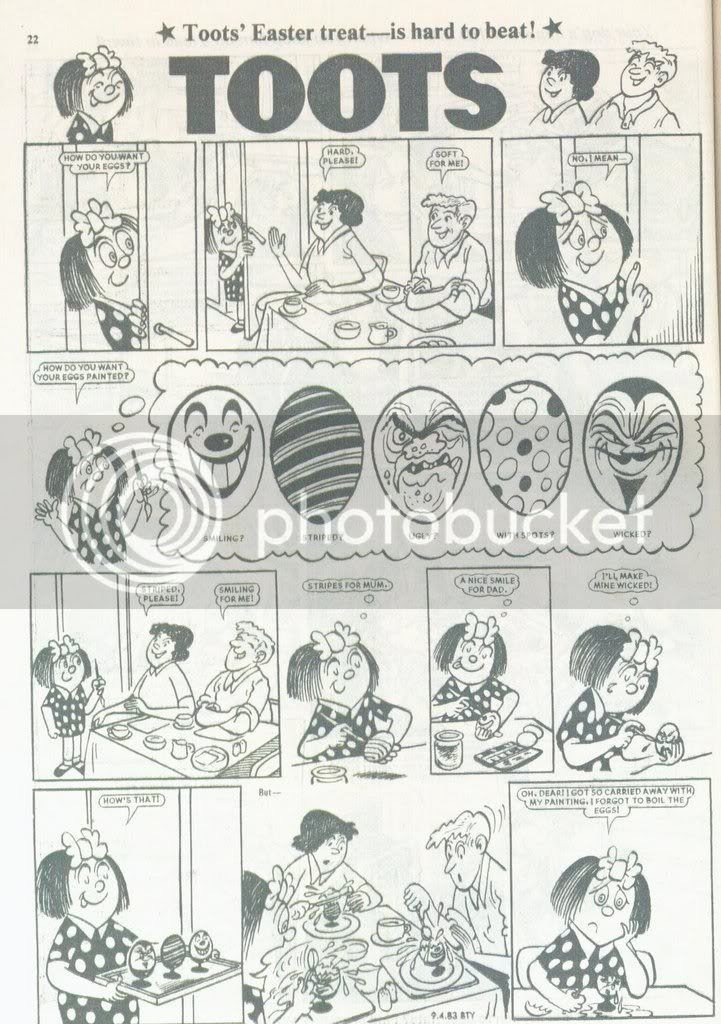 Thanks steelclaw for the image

Thanks philcom55 for the image.

Hi Peter, Toots by Bill Ritchie was a comic strip which ran for over thirty years in Bunty and featured the week by week adventures of a little girl in a polka-dot dress with a ribbon in her hair. Think of a junior, female version of Ginger in the Beezer and you wouldn't be far off the mark. thanks Kashgar

Its great finding out other comic work they did I didn't know about. Pip the Penguin is drawn by Bill.
Bill also drew a junior version of Baby Crockett...this had fewer pictures and less words then the Beezer version.

Bimbo had a name change as the word became too silly...Little Star was the new name. Bill also worked in Mandy comic drawing Mandy! I'll try and find the example for this at comicsuk forum.
at July 24, 2008 No comments:

Bill Ritchie- Is great at the fun cartoon poster crowd! 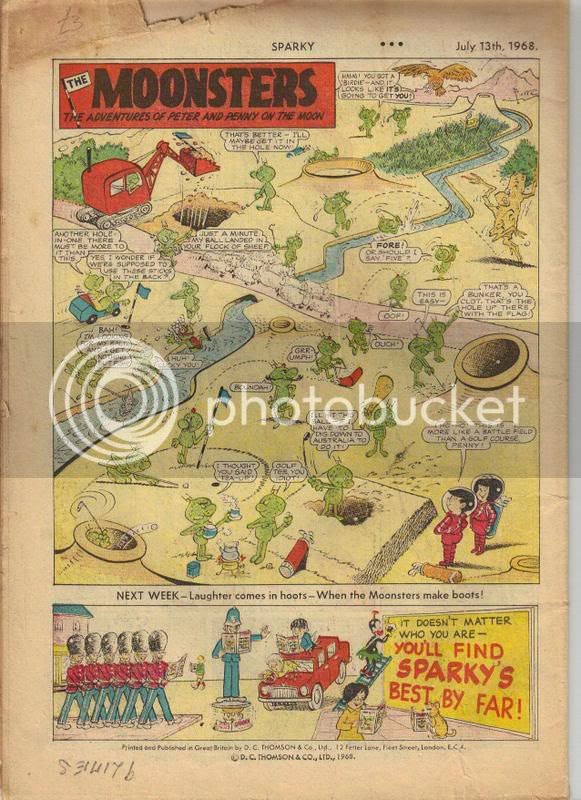 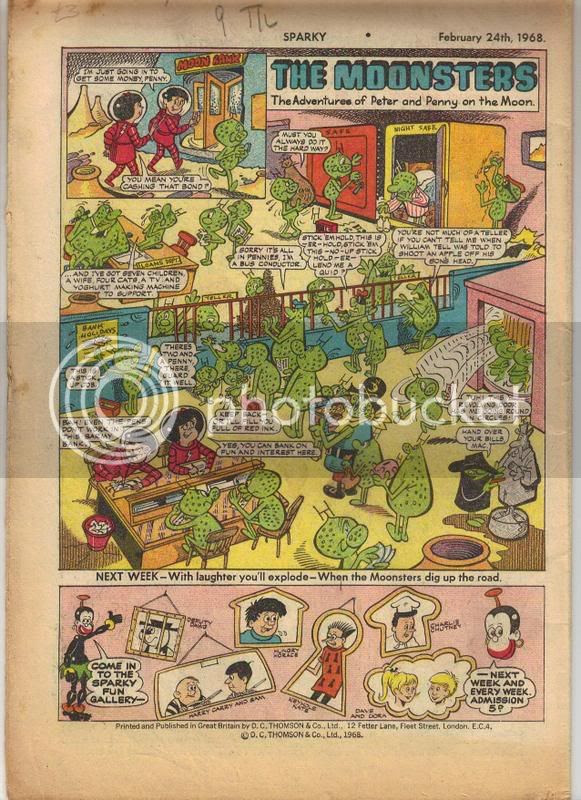 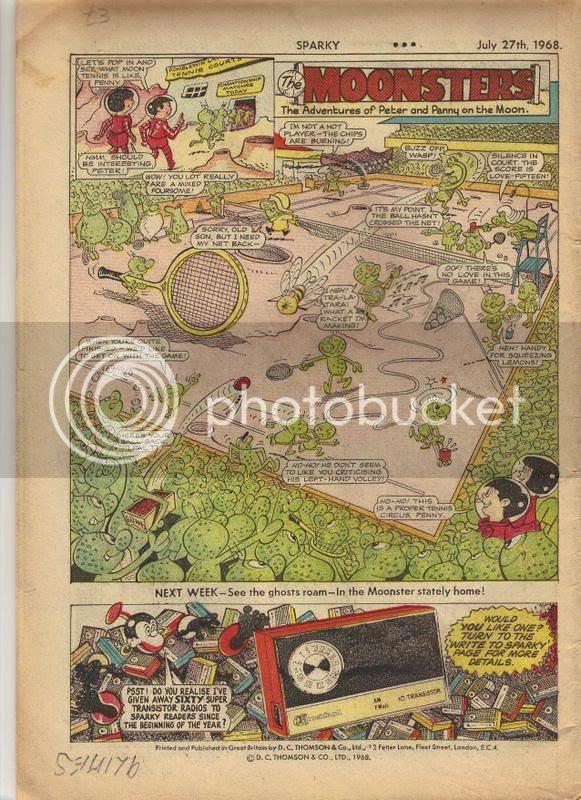 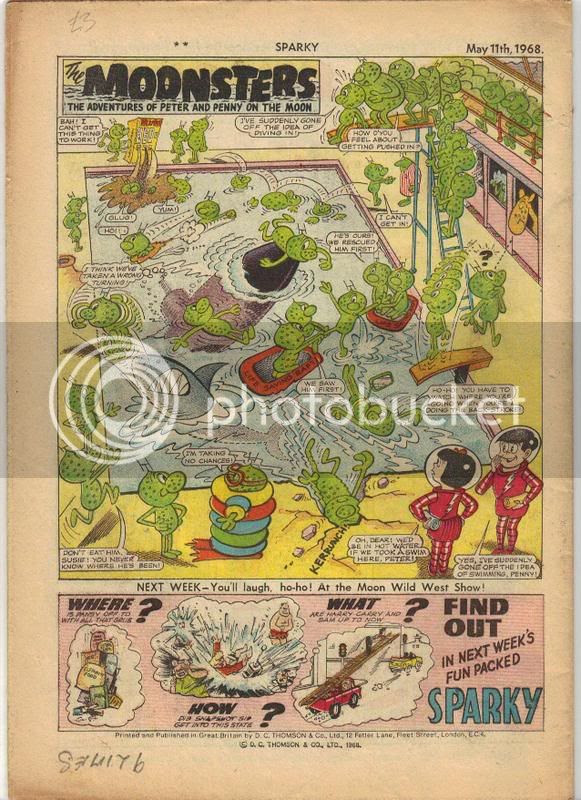 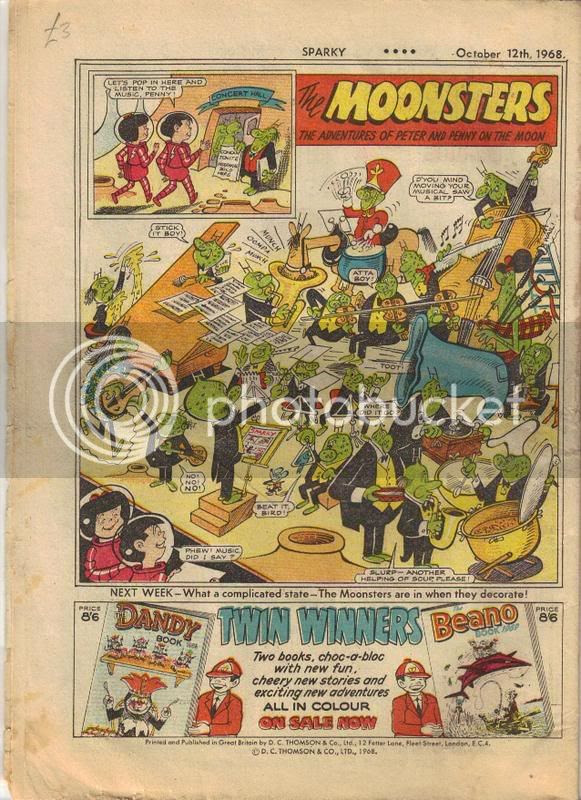 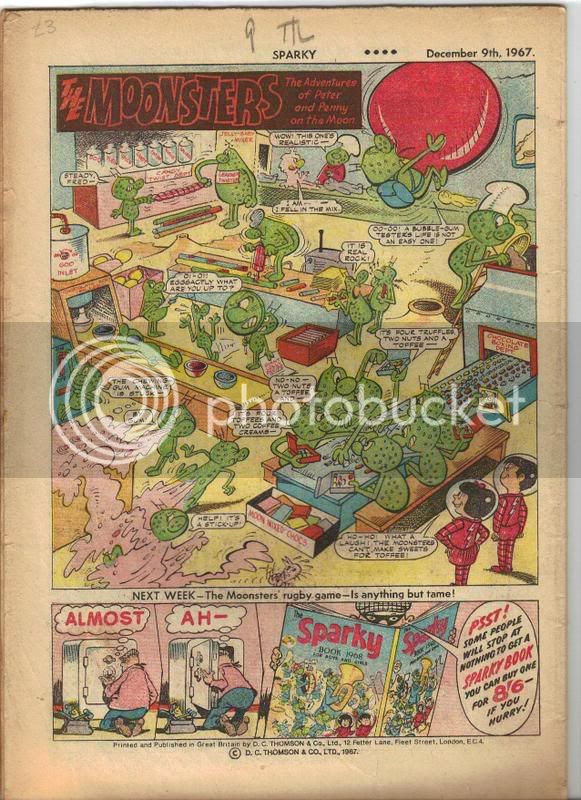 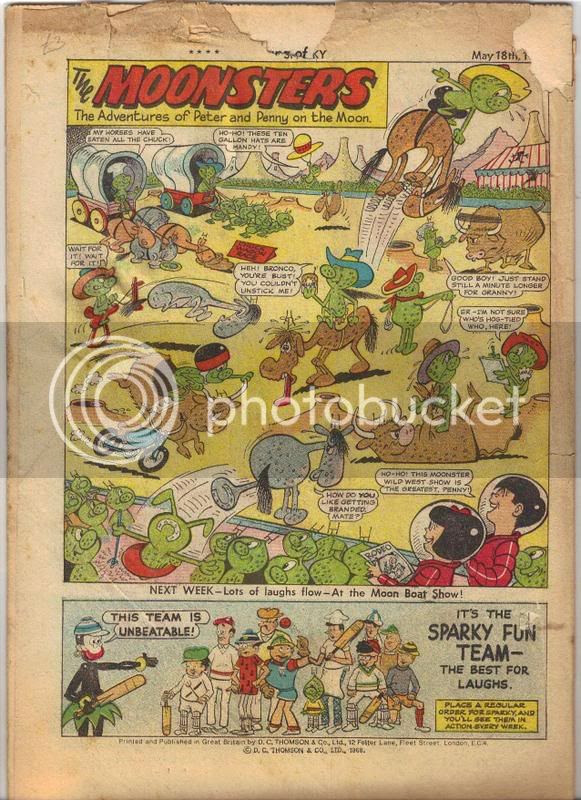 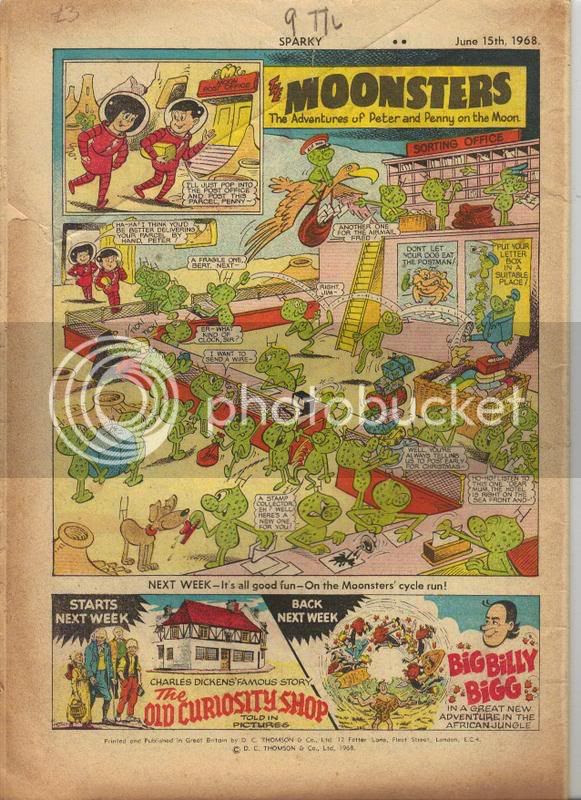 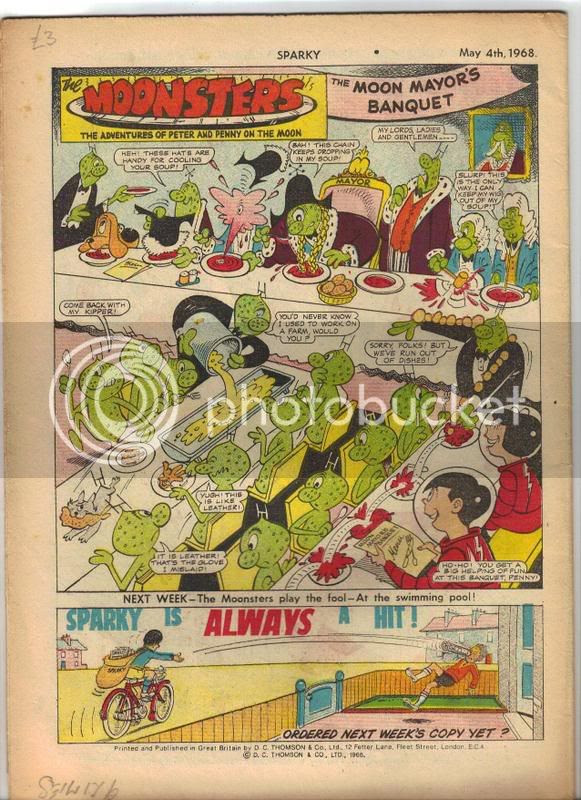 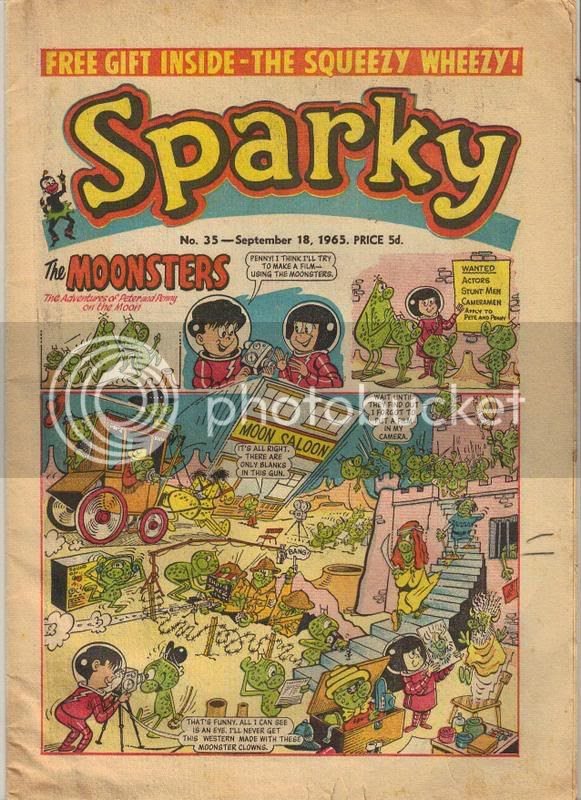 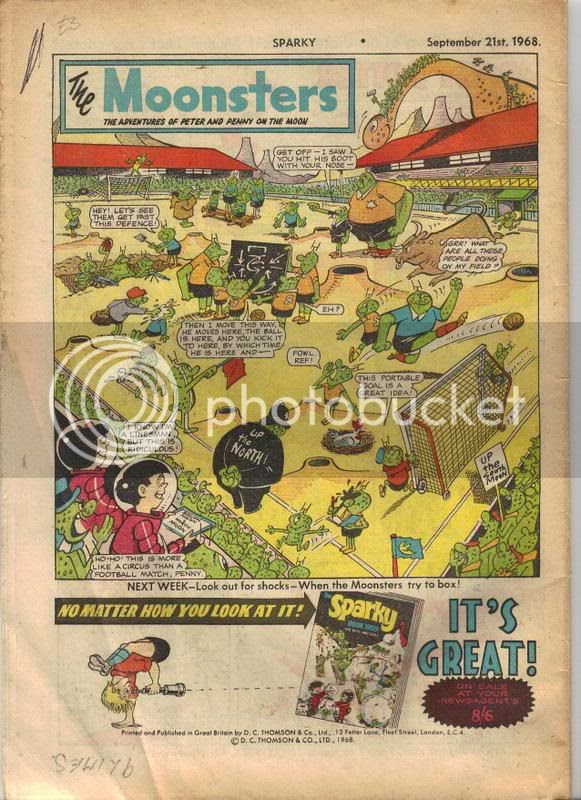 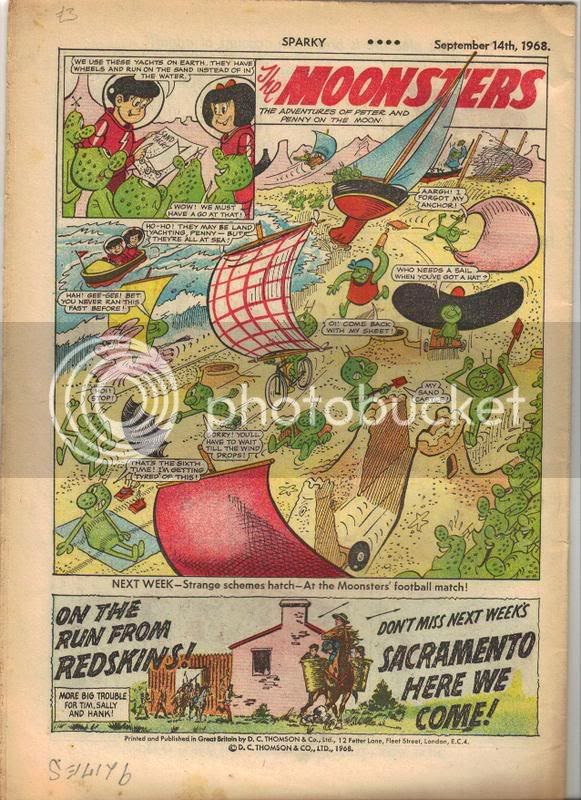 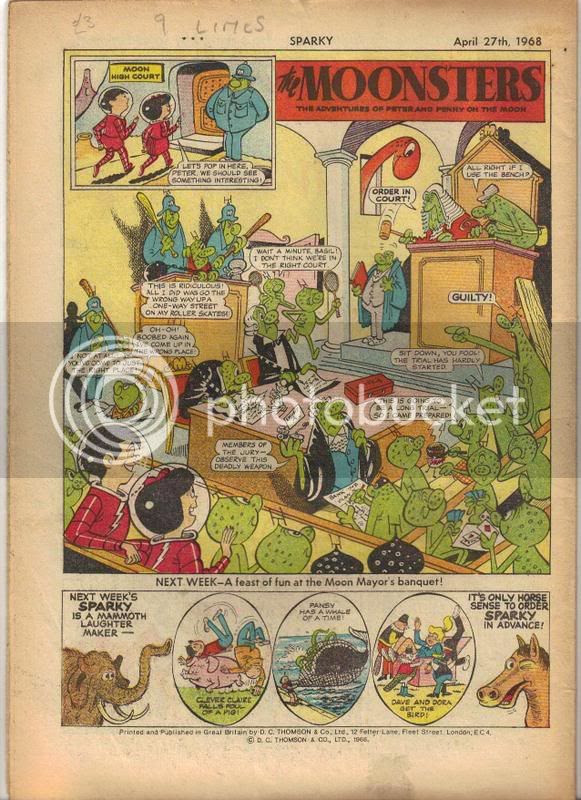 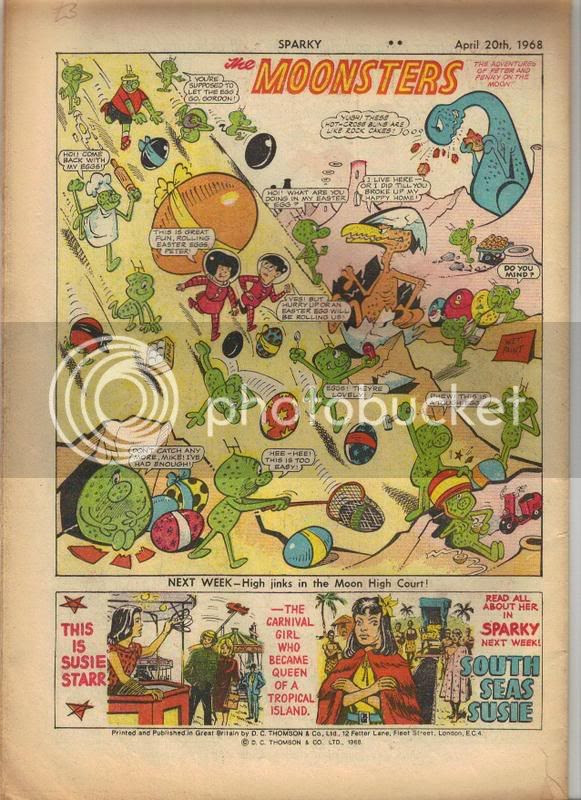 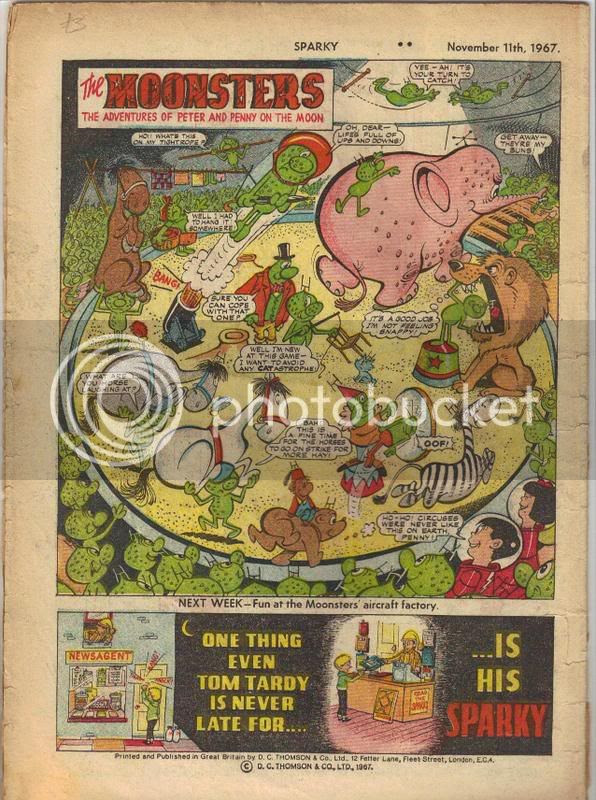 These are just so great...Classics from the comics must show these!Thanks Spy for these great images. 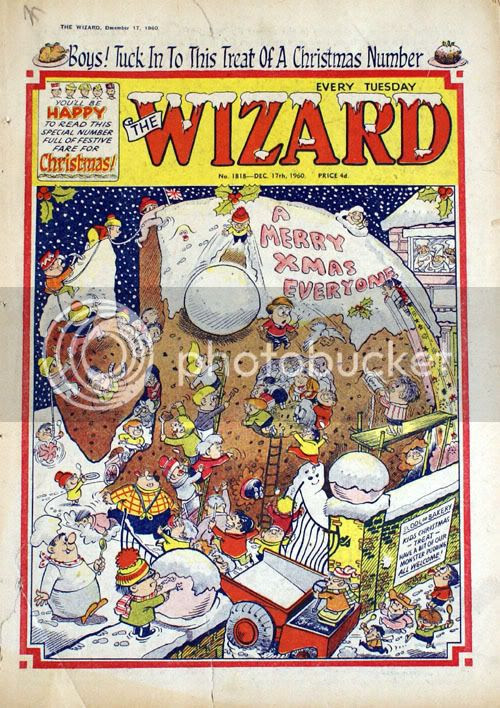 Just a wonderful Christmas cover....nice use of shapes balancing the picture...going inside and outside of the pud...you could stare at this for ages...
Its difficult to not be cluttered or run out of gags...But these show Bill had no problem. I love the cartoon crowd scene...

quote
Kashgar ... he did in the New Hotspur titled 'The Cat Street Kids'.
Other strips he did in this format were The Moonsters and Spadger and his Pals in Sparky and Rover & Wizard respectively.

From this book has the working of an early version of Little Miss Sunshine- Mr Happy's day out. This is 1975 the story. Little Misses books came out in 1981.

You can tell the drawings are not by Roger has the dog is very basic and comes from a drawing game...i.e a stickman is chased by bees...jumps into a pond(makng the nose and whiskers) then the stickman has two eggs and two sausages (the eyes and ears of the dog)
So the artist draws very simply.

In this story Mr Happy goes to different people to solve there problems making them happy.
Get your Little Miss Sunshine book out and compare the two.
Little Miss Sunshine meets the King rather than the Mayor is one difference.
The names of the places are Glumland which changes to Smile-ville in the gift book.
Little Miss Sunshine 1981 version is in miseryland and it changes to Laughterland.
Also the sign with the list of things people had to do is used in each story.

Its nice seeing the development of a story over many years.
at July 23, 2008 2 comments:

Roger Hargreaves- on ebay! Sorry most of the pictures have disappeared!

The artwork features 3 original animation cells combined into one picture, each cell is 12 ½ x 16 & is copyrighted to Roger Hargreaves & Mister films limited 1991.

The cells were bought from Stockport Art Gallery after an exhibition of animation cells.

You can tell that Rogers favourite Mr Men was Mr Silly on this bagatelle, annual and night light.


the early Mr Men generally had no eyebrows thats how you can tell if its old...

awww! nice and charming fabric. Great for a cusion cover.

don't have this one..
IT'S FULL OF STORIES,GAMES & PUZZLES

This is one of a very few books printed worldwide, created with a fashion show invite on the back cover. This can complete the little Miss series that compliment the Mr Men books written by Roger Hargreaves. This book cannot be bought via retail as it was especially made and is one of the 1000 made that had to be received by personal invitation to attend the fashion show held in france in 2006.
Never seen this before!! drawn by Adam the Son of Roger...the front cover of the book doesn't say by Roger Hargreaves as normal...

Little Miss Chatterbox and the Burst Strawberry book. This is a rare and hard to find promotional issue book which was produced as part of a promotion for l'Oreal kids shampoo. It is a 12 page story.

Very Nonsense scene :)..again a jigsaw Ive not seen before..
Puzzle Board from 1983.

HERE IS A VINTAGE CARD GAME OF THE MR MISCHIEF'S GAME OF CHEAT
HAS 36 CARDS
BY MICHAEL STANFIELD FROM THE 80'S
Great funny Mr Skinny on the bench...Roger sure kept his work fun!


I remember this was used on wallpaper as well in the 70's..

The fathers absence is explained..
Started in Whizzer and Chips 17th Nov 1979.
A lovely fun strip.
Its nice how she rhymes the spell she says. Also the twitching of the nose...winks..tweaking ear while saying it. The stip is of course based on the American tv sitcom Bewitched.

Every character is different...clear..interesting and fun. The backgrounds are siimple But effective. Every panel is different and arranged. Has someone has said at comicsuk the picture is not static ever.
http://uk.geocities.com/pjgregparlett

The back of annaul.