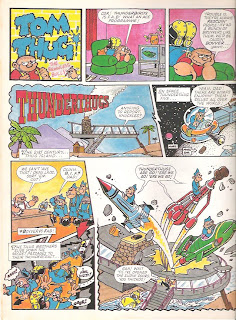 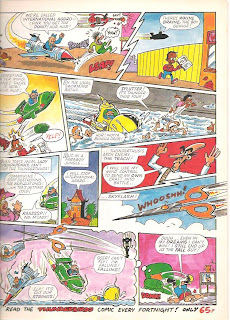 Buster 14th December 1991.
A special two pager of Tom Thug to advertise a new comic Thunderbirds. This is the era when Blue Peter made Tracy Island the most successful make ever on the program..a whole new generation of kids discovered Thunderbirds for the first time being shown on BBC 2.

I like the outhouse gag and the smokey chimney at Thug Island!

Also I like the colouring of the strip.
Owning a original of Tom thug I can see the real control Lew has with a pen.
Glad this character carried on in Buster when Oink folded..
at May 14, 2010