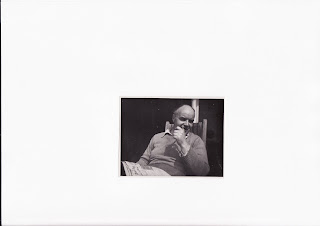 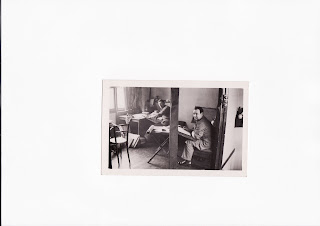 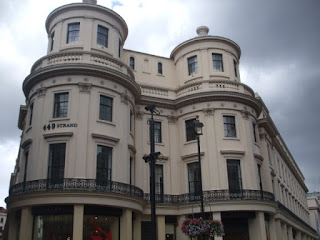 Studio in the Strand

My father was born in South London in 1910.
His family were involved with the theatre and he had one sister.
My father was always called ‘Robbie’ and following theatrical tradition we were brought up to call our parents by their first names of Robbie and Barbie.
His parents and sister moved to Flushing, Long Island, New York after the Second World War.

My father always said he never passed an exam in his life, but obviously realised his talent was art and he was accepted and studied at (Central) St Martin’s School of Art, London.

He had a studio in the Strand in a circular tower and the shape made it very difficult to fit furniture in. The building is still there today.
In the Second World War he joined the RAF. Thankfully they used his talents as an artist and he soon broadened his work from technical drawings into poster and cartoon work bringing humour into instructions regarding safety and security procedures and this was officially appreciated and encouraged.
He met my mother, Barbie, during the war. She was in the WRAF.
They got married in a Register Office with two passers-by as witnesses in about 1947 and moved into my mother’s family house in Purley, Surrey.
I arrived in 1950 and was named after my father, ERIC Arthur Roberts and my sister, Amanda, arrived in 1953.

My parents lived in that same house in Purley until my father died in 1982.
My earliest memory is of my nursery which had a large frieze of pictures of Disney characters like Mickey and Minnie Mouse, Donald Duck, Pluto etc painted by my father in his style using radiant water colours with an Indian ink black outline which I loved as it was like stained glass.
After the war I think my father freelanced for Amalgamated Press and in the late 50’s I can remember my father covering for other artists and drawing Billy Bunter and Sinbad the Sailor.

Then he had a freelance contract with D C Thomson which included clauses that he was not allowed to work for anyone else or sign his work.
He would send his work to DC Thomson by rolling it into a spool, then wrapping it in thick brown paper, tied up with string and then sealing wax was applied to the knots and it was posted by the due deadlines. He was extremely professional and he would never even let the family post his work to D C Thomson for him. If there were postal problems he would deliver and collect his work to Fetter Lane or Fleet Street.
He always worked from home and his lifestyle was quite reclusive, although he had a very good sense of humour and could be extremely sociable.

He usually slept during the day and worked through the night.

His easel desk, plan chest etc and all the tools of his trade were in our front room, which co-incidentally was called our drawing room.

He was a pipe smoker for many years, smoking Golden Virginia Rough Cut tobacco and had a collection of pipes in a bowl by his side.

It was quite a large house and he had a back room downstairs as his DIY work room. He was definitely a hoarder of bits and pieces and they were everywhere that he said might come in handy at a later date. He enjoyed carpentry and was good at it and built us a very substantial see saw in the garden.

He always said that being an artist did not come easily to him and I think his work shows how regimented he was and his attention to research and detail. He was his biggest critic and worked extremely hard.

Because the comics came out weekly and there were the annuals to fit in, I never knew my father to take a break or a holiday and he was always working against time. When we were small he used to drive my mother and us to friends in Cornwall in the summer holidays, get the train home the next day and then come down and collect us. Latterly we went on our own.

The other reason he did not take a break was if he did not work he did not get paid.
I can only remember him being ill once with a very high fever and then he had a heart attack in the mid 1970’s and lung cancer in the early 1980’s, which he died of in 1982. Therefore I do not think many artists had to cover for him.

His work routine was he either received scripts from D C Thomson, or he came up with some of his own scripts, which would be sent to DC Thomson for alteration/approval. When they were approved he would map out a rough pencil draft of the strip and again post it to DC Thomson’s for alteration/approval before producing the final strip on special thicker white paper in Indian inks. He worked about eight weeks ahead of publication.

My father penned his own captions, which were always in capital letters. His actual writing was quite idiosyncratic.

My father did not have any contact with other artists and about every 5 years he would go up to D C Thomson’s in Dundee or his boss would come and stay with us. He was called Albert ‘Bert’ Barnes and he had a thick Scottish accent and facially was reckoned to be the inspiration for Desperate Dan.

We all had to be on our best behaviour for these visits and the house was cleaned from top to bottom.

Bert Barnes was the only person I ever remember calling my father Eric.
One bonus for us as children was if the comics ran a competition they needed a winner for the first week and we were often named as the winners......as no one could have had a chance to enter the competition, we ‘won’ and were given a collection of tartan scarves, hats and purses over the years.

My father kept working till 1981 when he became ill with lung cancer.

After my father’s death in 1982 my mother was contacted and visited by a well known collector on the TV. He took the majority of my father’s work, comics and annuals to look at them, value them and perhaps offer to purchase them. She never heard from him again and he did not return her contacts. She did not feel able to pursue him further at that point in time.

Dear Peter
Thank you so much to you and your wife taking the time to visit us today.
It was great to meet you both.
Thank you also for taking the time to bring over the comics and annuals for us to see.
I attach the documents I gave you.
I wish you every success with your cards, we were really taken with your work.
Also thanks for all your dedicated research into my father's work.
Let me know if you have any queries or updates.
Take care both of you.
Erica

I had a lovely time meeting Erica and her husband and lovely cakes..:)
Was sad to hear she had none of her Dad's drawings I'd suggested she contacted DC Thomson and maybe they could do a good scan of a original work for them.
Thanks Erica for your time and interesting information on top talent Eric 'Robbie' Roberts.
Peter
at April 24, 2010

Well done Peter on contacting Erica for some fascinating memories of this much-loved artist. The work of Eric Roberts was always a favourite of mine growing up in the Sixties.

I've given your blog a plug on mine. Hope you get lots of hits!

I was very interested to learn more about the late great Eric Roberts, someone whose art style I have always admired and enjoyed. It was doubly interesting, because Eric Roberts' daughter, Erica has given such a vivid and personal picture of the life she shared with her father.

I was a little saddened to hear about the 'collector' who took away some of the treasured family artwork. I can only hazard a guess as to who the collector was. The trouble is, I think I may have already identified him in my mind.
It is a sad part of an otherwise fitting tribute to an artist of great talent.

Thank you Erica and thank you Peter.

Yes, I can guess who that collector was too, unfortunately, as he'd attempted similar things before. Shameful.

I hope Erica can at least have the comfort that her father's work was seen by millions of children over the years and it provided much pleasure and fun for those of us growing up in the Sixties and Seventies. I always enjoyed Eric Robert's comic strips but I also immensely enjoyed the many puzzle pages and activity pages he did for The Dandy books and specials. A distinctive and talented artist.

It's great to acquire such a panoramic picture of the traditional British comics illustrator - an almost clandestine creature before the 1980's and in comparisson to how much is revealed about the profession through today's creators and the industry media.

Thanks indeed to Erica for those generous insights and to Peter for his research and publishing venture.

Great to read Erica's comments about her Dad. A fine comic artist and always a personal favourite.
I'll post more details of Eric's work over on the comics uk site and if Erica should like a stripography of her father's work please just let me know and I'll see what I can do.